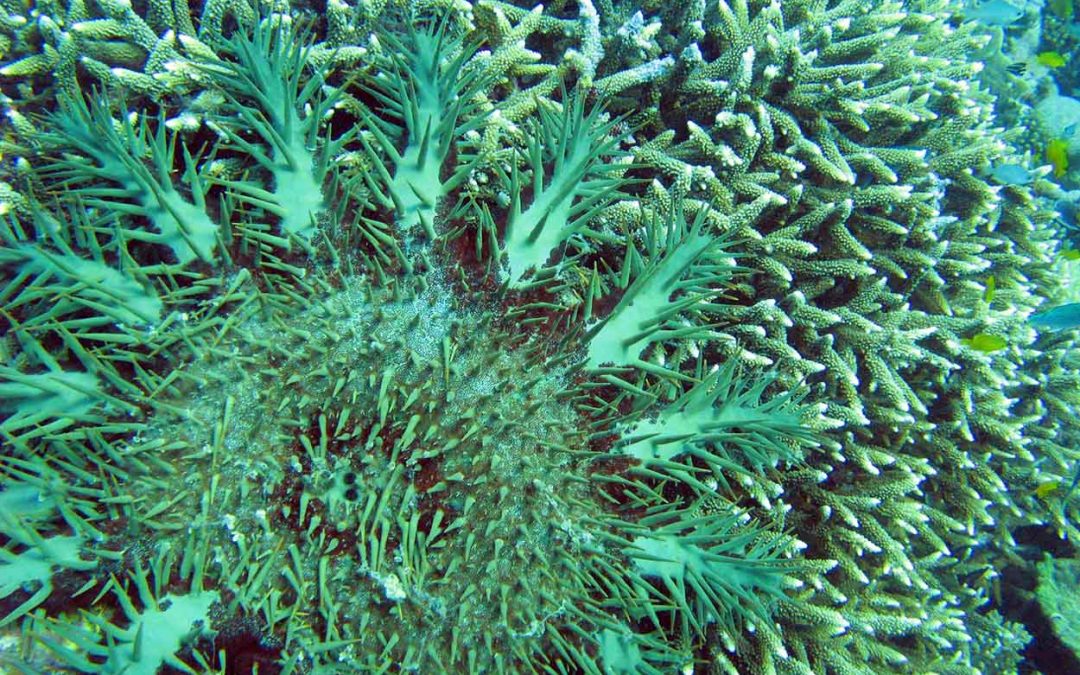 If coral polyps had nightmares, the crown-of-thorns starfish would be the giant monster hulking overhead ready to digest them on the spot.

These large starfish normally live within the reef without causing problems. When conditions are right, however, their population numbers can explode. Their coral-eating ways have severe negative impacts on the coral reef at these times.

You may spot one while out snorkelling on your holiday here with us at Mantaray Island Resort, so here are some facts to help you to understand these controversial critters.

What is the crown-of-thorns starfish?

Crown-of-thorns starfish are echinoderms. This means they are marine invertebrates (animals without backbones) with spiny skins. Despite this, their bodies can twist and bend easily. Sea cucumbers, sea urchins and other starfish are other echinoderms you may spot on the reef.

Crown-of-thorns are usually between 25 and 35cm in diameter, but big ones have been known to reach 80cm or more! They have up to 23 spiny arms. Each of these has two rows of tube feet underneath.

You may spot them in various colours, from dull browns and greens to bright purples.

Crown-of-thorns starfish are generally nocturnal. To find one, look for tell-tale feeding scars of white dead coral. If there are many in the area or it’s the breeding season you may also see adults active during the day.

Where did the crown-of-thorns starfish originate?

They usually only occur at low densities of one or less per hectare, with little negative impact.

When an outbreak occurs, and numbers skyrocket, however, coral reefs can be decimated.

What do crown-of-thorns starfish eat?

They eject their stomachs from their mouths. They cover coral polyps with their stomach folds, secreting digestive enzymes which digest the coral on the spot.

Each starfish can eat up to a massive 13 square meters of coral a year. They usually stay on a coral for many days eating all the living tissue, only moving on once the whole coral is dead.

When it’s time to move on, they have a top speed of 35cm per minute in warm tropical waters.

How do crown-of-thorns starfish reproduce?

Crown-of-thorns starfish can reproduce at 2 years old. They reproduce quickly and in high numbers.

Starfish group together and release eggs and sperm into the water at the same time. When these meet, the egg is fertilised. Female crown-of-thorns release tens of millions of eggs each time.

As they grow into juveniles, they’re very vulnerable to predators, so they hide in gaps and small caves. They eat algae at this stage.

At 6 months old, they swop to eating coral and multiply.

How dangerous are crown-of-thorns starfish?

Touching the spines causes immediate, intense pain, with swelling and bleeding that often continues for up to three hours. Prompt first aid can help to reduce symptoms.

But…more serious envenomations have occurred, so it’s always advised that you seek medical care if you’ve been injured.

When exploring the reef, it’s always a good idea to look but not touch the fascinating creatures that live there, because some do pack a punch if disturbed. 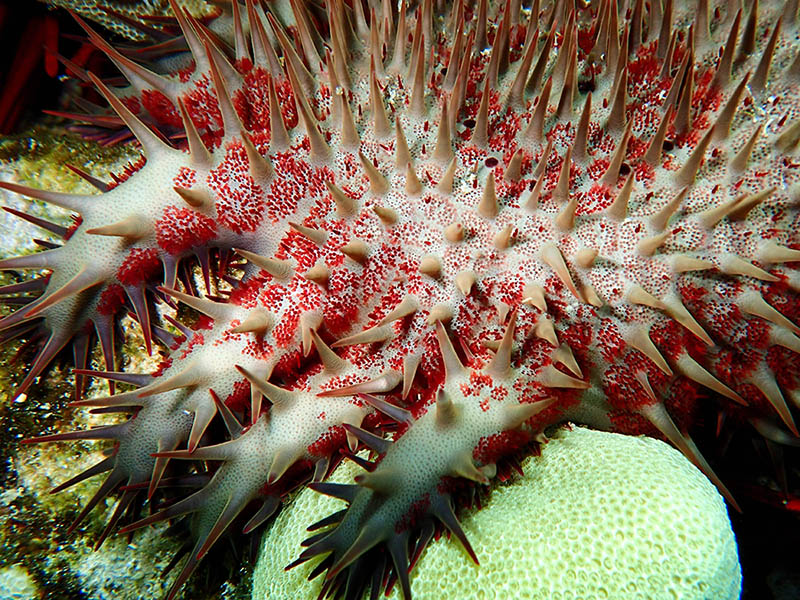 So why are crown-of-thorns starfish a problem?

These voracious predators wipe out coral really quickly. In fact, crown-of-thorns starfish are one of the biggest causes of decreasing coral cover – by up to 90% in some areas.

Massive attacks by crown-of-thorns starfish reduce reef resilience, so recovery to a healthy state takes longer. Dead coral goes white and is often colonised by algae and sponges, making it harder for new corals to establish. Fewer corals mean less spawning, so fewer young corals are growing to take the place of dead ones.

Fish species that depend on coral for nursery areas, habitat or food find it hard to survive when coral reefs die.

But why are coral reefs important, anyway?

They are nurseries for many fish species, so they support local communities dependant on fishing for food. They even support the commercial fisheries industry.

They buffer communities against cyclones and natural hazards.

They support communities through encouraging tourism.

And of course, they are exceptional places to visit!

We’re still learning about all the factors that contribute to crown-of-thorns outbreaks.

Excess nutrients from coastal development or agriculture can feed larvae. Flooding can flush these nutrients onto the reef.

Overfishing is also a significant contributor because it drastically reduces the number of crown-of-thorns predators.

How can crown-of-thorns starfishes be safely removed?

We’re still learning about the best ways to control crown-of-thorns.

Most commonly, the starfish are taken from the ocean and disposed of on land. Recent research has suggested that this could cause problems, though. It seems as though crown-of-thorns may release chemicals that trigger mass spawning if they’re handled roughly. This type of control can be timed outside of spawning season to avoid this risk.

Crown-of-thorns can also be injected with various chemicals, with no need to physically remove them. Bile salts can be used but are expensive, tricky to transport and don’t stay fresh for long.

Vinegar is the most useful option because it doesn’t have negative environmental impacts. It’s practical, cheap, accessible and safe to handle. It works because the crown-of-thorns can’t regulate its own pH, so the vinegar decays its tissues and membranes. 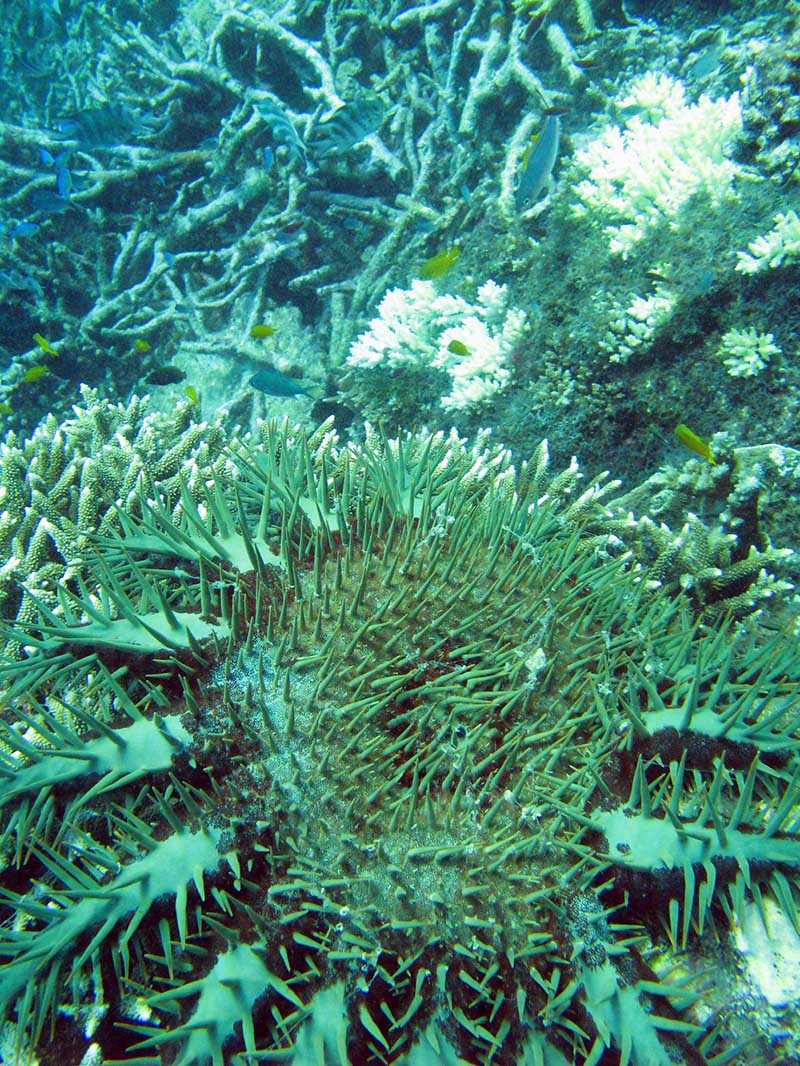 Do Crown-of-thorns do anything useful?

Crown-of-thorns aren’t introduced, so they’re a natural part of the ecosystem.

When outbreaks were less frequent, they served a useful role by clearing gaps in the reef to allow massive, slow-growing corals to grow, increasing biodiversity.

Human impacts have increased the frequency and size of outbreaks. The reef is also under pressure from other human impacts. This is why crown-of-thorns need to be controlled now to protect the reef.

How can I help?

There is a family that holidays with us frequently that spends a large portion of their holiday removing crown-of-thorns from the local reefs.

Guests who feel confident in their knowledge and experience in removing crown-of-thorns can become involved.

But just by staying with us, you help to support our control efforts and help to protect our beautiful coral reef.