Our Favourite Thing to do on a Rainy Day in Fiji

A rainy day in Fiji is perfect weather for a Mantaray dive.

When you are on the perfect island getaway you can’t let a bit of rain dampen the trip.  Did you know that diving on a rainy day in Fiji can sometimes be better?  It’s one of our favourite activities and visitors love the recommendation as you often see more activity.  Let Atu take you on an under water journey.

Just got back from yet another spectacular dive here at Mantaray Island. It was raining hard at dawn, the sky covered with dark clouds that stretched over the island group. There was no doubt in my mind that the diving would be the same or even better than a clear, sunny day. 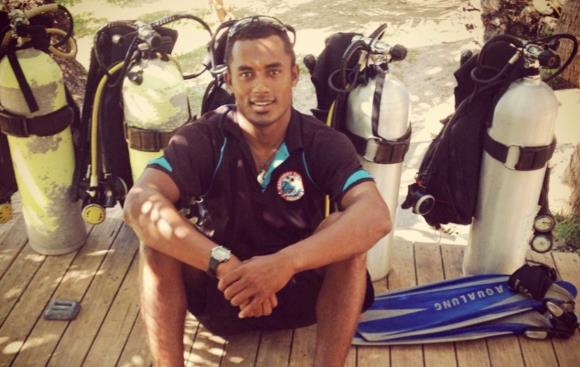 You see, the islands here are mostly made up of sand and rocks with no rivers or streams. Visibility and clarity of the water would mostly be the same as it is on days with no rain. We tend to see a lot more sea life on rainy days actually. The trick is to know which spots to dive in.

As Occy (our dive boat) set out at 9am for the dive, I had to reassure the divers once again that the dive would be great. “Alright guys, let’s go diving!” I shouted out as we left the surface descending into the deep blue sea.

The dive spot we chose was the Caves of Babylon. As we approached the east entrance to the caves, I could see that a lot of silt was being coughed out from within. I wondered what had stirred the sand inside. As we drew closer, a small school of inquisitive mangrove jacks lurking in the shadows had come to check us out. I wondered what they would be thinking, to them we had big glass eyes, with weird looking pectoral fins and tail, a silver shell on our back and blowing bubbles! They must have been thinking what the heck! Giggling into my mouthpiece I freaked, out of the dark shadows came a massive 5ft wide marble ray. I pinned my heels back and hovered backwards as this majestic creature swam right under me, cruising out of the cave into the blue open. It was he who must have been feeding inside causing the silt to rise and stir the visibility. 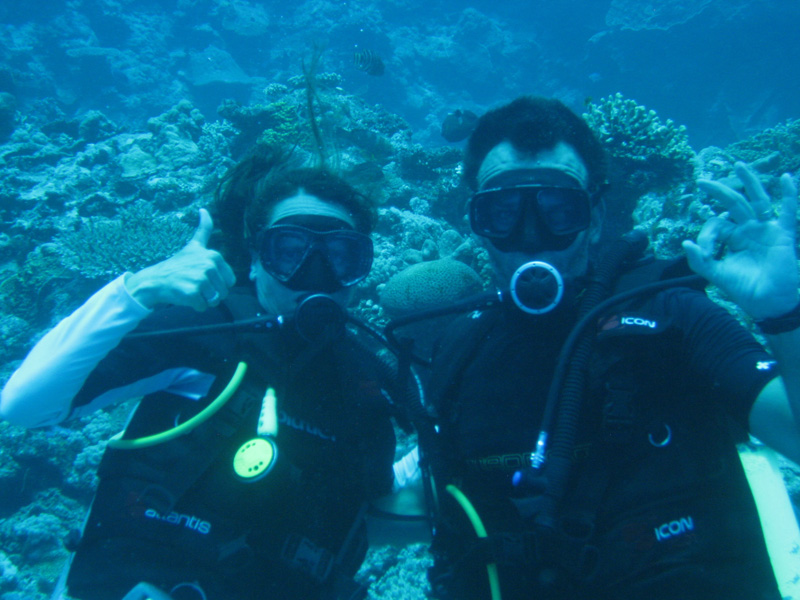 As we drew further into the caves, it started to clear up with faded beams of light shooting down from the cracks. Looking up we could see the blue silhouettes in the cracks with the black figures of jacks hovering above. Swimming out of the first cave and into the next we swam into a massive school of glassfish which occupied the whole cave. They separated themselves making way for us to pass only to cover up the unoccupied space from behind as we moved forward. There was literally thousands of them. During summer when the water is warmer, this species would appear and dwell in numbers in caves, cracks and crevices in turn attracting so much marine animals to prey on them. This school was probably the only one left since it was almost time to hibernate and was probably why there was a lot of activity in the caves.

After 20 minutes of swimming through the caves, we came out to the wall where we encountered the biggest school of jacks I have ever seen! Accompanied by a large school of red bass, bluefin trevally, golden trevally and giant trevally they must have come from all over just to feed. Imagine when you watch Nat Geo Wild and see land animals in Africa coming from all over just to drink from the pool of water in the middle of the dessert terrain…this is nature at its absolute best. As we passed through this commotion onto the reef edge, looking down into the blue abyss, I could make out what seemed to be a tail of a shark.

It was under a rock on the bottom of the second drop off before the darkness consumed the depths. Diving down to take a closer look, to my excitement there were two! Two tawny nurse sharks snuggled up next to each other. My guess was they were sleeping…Fiji time aye haha.

Forty-five minutes in and three minutes to go on our safety stop, I could see nothing but cheery eyes on my divers’ half-covered faces. Why wouldn’t they be happy? We experienced an epic dive on a rainy day, a time where their initial hope was limited.

You see, sometimes the best dives are the ones that you doubt doing. Hey – it beats hiding inside hoping for the sun to come out and this way you can’t complain about getting wet right!

As Atu mentioned if you are going to get wet by the rain you might as well be doing something fun.  With the extra fish activity under the water in Fiji why not make the most of a rainy day and go for a dive with Manta Dive.