Escape Fishing with ET is currently filming for its 19th action-packed series. Mantaray Island Resort had the pleasure of hosting ET and the crew for some big game fishing. 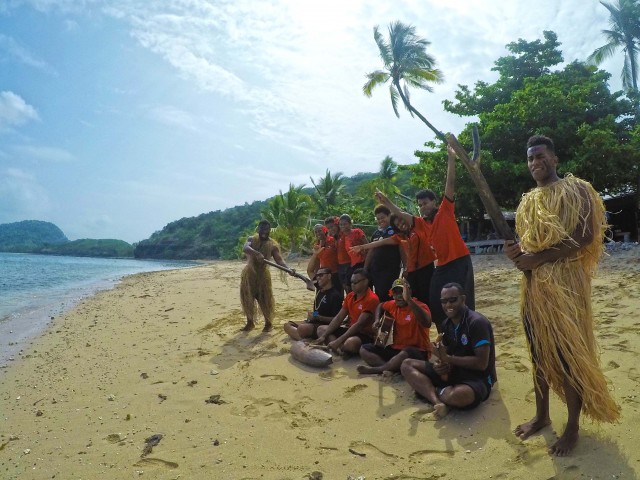 The morning started with a bang. Straight away we caught a big Mahi Mahi. It’s bright blue quickly shifting to hues of green and yellow. Lines back in and 20 minutes later we were hooked up to a Marlin. What an incredible start to the day. ET started reeling in the line and then TWANG. The Marlin was gone. Heads hung low. Losing the Marlin set the tempo for the day. There wasn’t a bird in sight, not a single fish biting, it seemed like the ocean was empty. 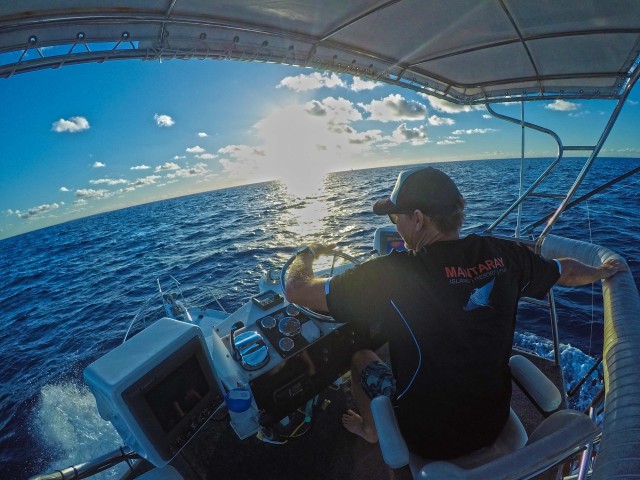 Just when we were getting ready to throw in the towel we spotted a dark cloud brewing in the distance. It was a massive gathering of birds! They were diving and swooping and a huge boil was forming on the surface of the water. It was a big school of Yellow Fin Tuna pushing the bait to the surface.

We steamed forward and within seconds had a double hook up. Monique on one and ET on the other. With those two fish secured and back in the boat, we dropped the lines back in. Again, we got a hook up within seconds. Monique was on the line and while she was reeling the fish in ET decided to cast a lure in from the side of the boat. A fourth Yellow Fin was hooked.

In total, we managed to pull in five big yellow fin tuna. A perfect finish to a beautiful day on the water. 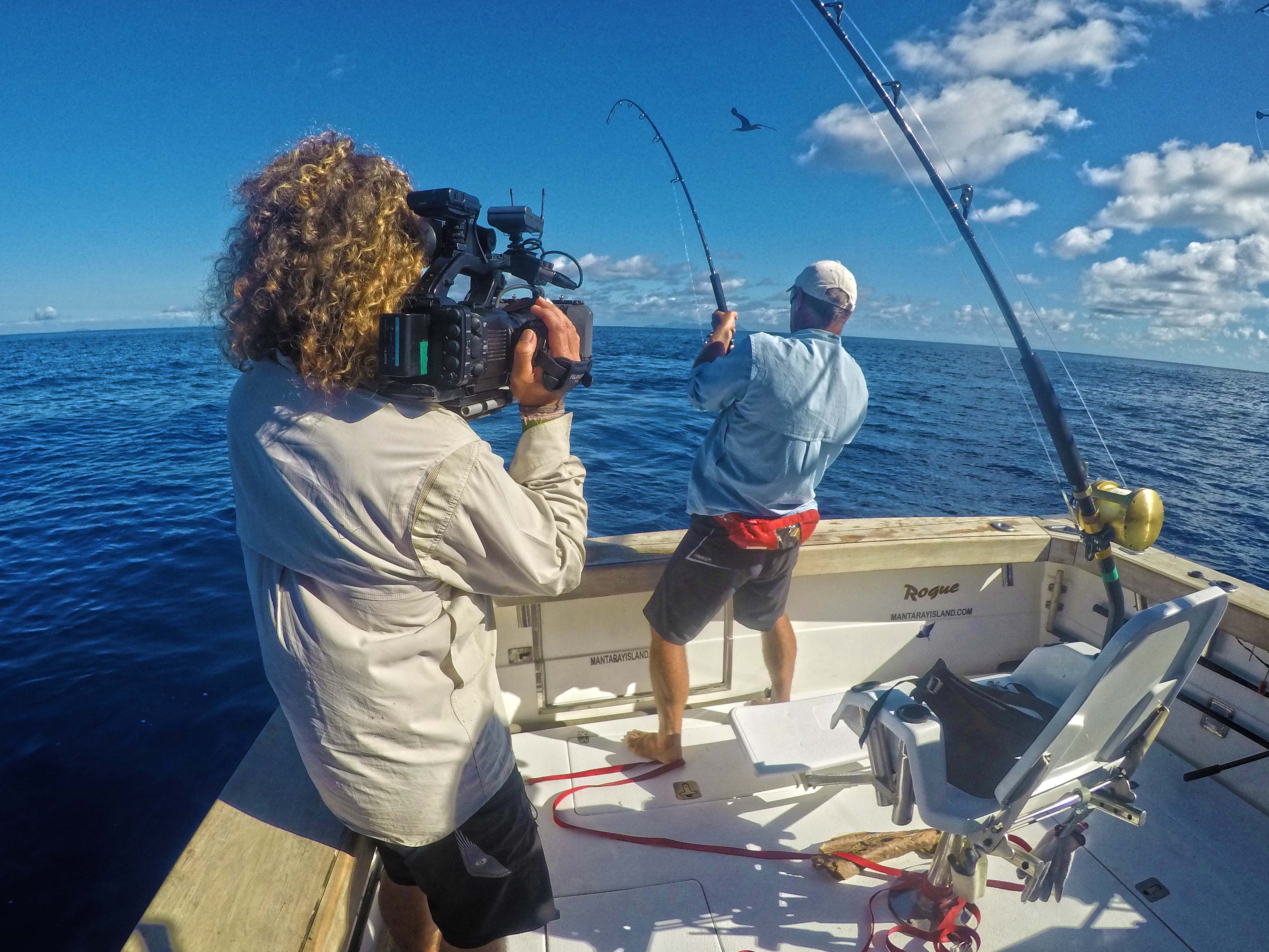 We knew that the Yellow Fin were still in the area and knew, where there are Yellow Fin, there are Marlin. We steamed straight out toward the same spot and dropped the lines in.

It didn’t take longer before the reel started screaming. Suddenly a huge Marlin hurtled out of the water and came crashing down. What a perfect start to the morning. The reel was hissing and spools of line were flying then suddenly, silence. Not a good sign. ET reeled in the line and there was no drag. Another Marlin escaped.

We weren’t going to let it get the better of us this time and decided to change it up. We headed to shallower waters to try some deep dropping. Monique and ET were placing bets on which one of them would catch the biggest fish.

With tuna as bait, we dropped the lines down to 350m. They barely reached the bottom before both rods had a hookup. We brought them straight back up and compared the results. Monique caught a big Ruby Snapper while ET hooked a Flame Tail. Not satisfied with his fish ET decided to go again. Again they both caught something. This time ET’s line looked line it had something enormous. Both pulled up their lines to discover, Monique had hooked another Ruby Snapper and ET had caught Monique’s line. This round goes to Monique. 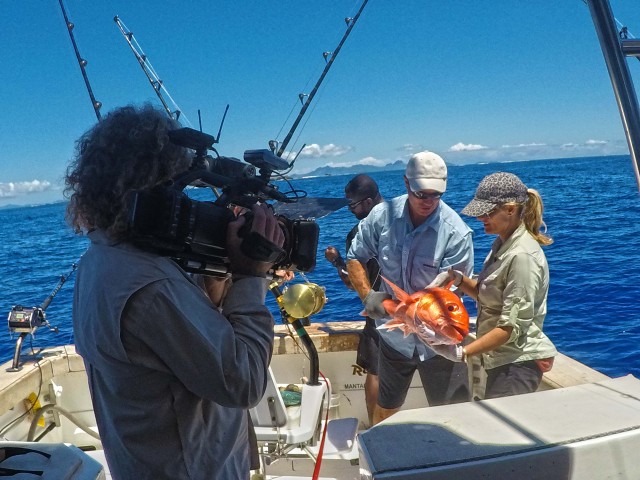 The day wasn’t over yet, we headed to a drop off to see if we could jig for some Dogtooth Tuna. The going was slow but ET managed to pull up a beautiful coronation trout.

Then we headed back for open waters and back toward the Yellow Fin. Paul the cameraman wanted to capture some underwater footage of the tuna and had brought a tow cam that we could use to get a shot of the tuna hitting the lure underwater. We set up the camera and started filming. We had to travel at a slower pace so it meant that we weren’t getting as much interest from the fish.

While we were waiting ET cast a popper into the water and BOOM! It got smashed by an enormous Yellow Fin. This fish wasn’t going down without a fight. ET would gain some line then the fish would take off and take it back. Then we would gain some line and the fish would take it back. Forty five minutes of fighting and the fish was about to reach the surface. Suddenly five big, hungry sharks started circling the boat. They knew the fish was getting closer. 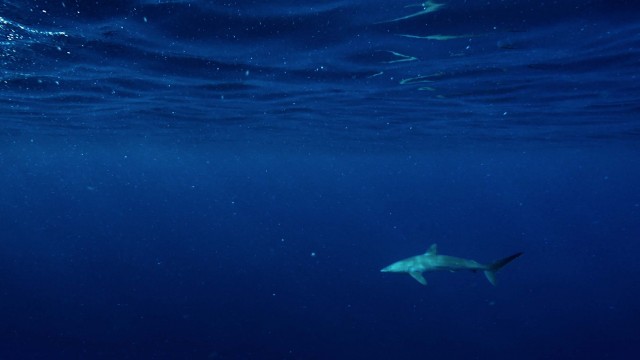 After all this hard work we couldn’t let them have it. We drove the boat a distance away and swung the bow away from the sharks. ET reeled the fish in as fast as he could and then Justin and Meuni rushed to gaff the fish. Success.

Once again an incredible finish to a perfect day on the water. 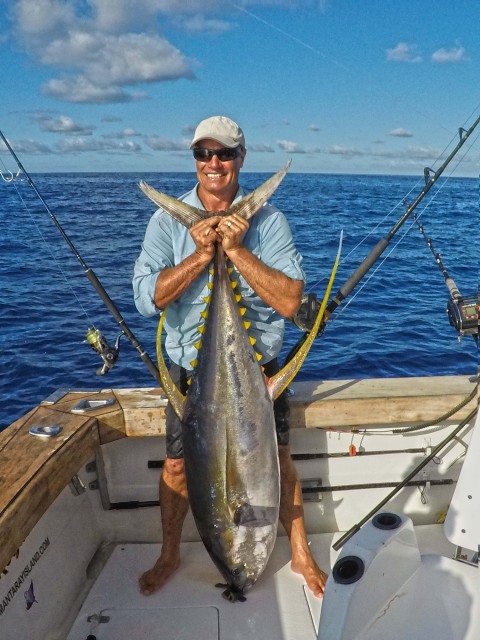 On day three ET and the team decided to explore the resort. Monique treated herself to a massage and ET jumped in the water to explore the reef. After lunch ET showed the Mantaray crew how to cast a net to catch bait fish. 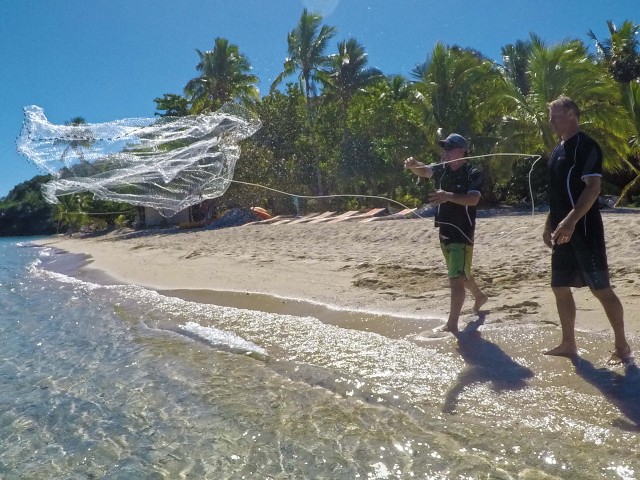 It looked like it was going to be a recovery day but the lure of fishing quickly pulled everyone back to the water and we decided to see if we could get one last fish.

The tides were perfect, the current was rushing and we knew this was the perfect time to try and catch a GT. We steamed from reef to reef searching for bait fish but despite our efforts, there wasn’t a fish in sight.

We were about to call it a day and starting packing up when Meuni spotted a big splash. ET quickly cast his popper and WHAM! A GT struck. 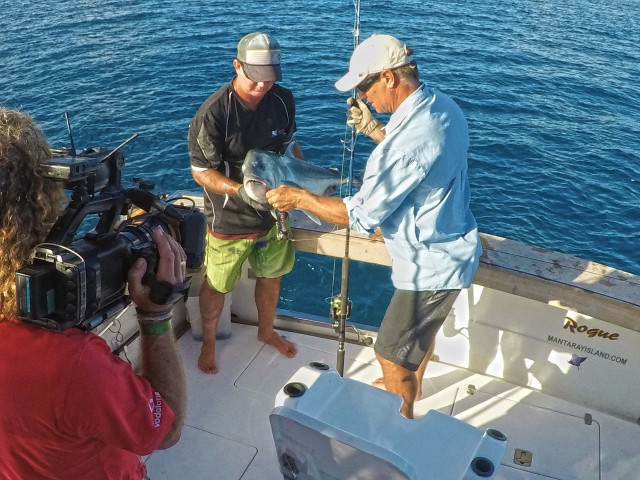 What a perfect three days of fishing. Yellow fin, Ruby Snapper, Mahi Mahi, Flame Tail, Coronation Trout and a GT. We caught fish trolling, deep dropping, jigging and popping. Proving that if you want to experience some real game fishing, even the pros agree – Mantaray Island Resort is the place to be. 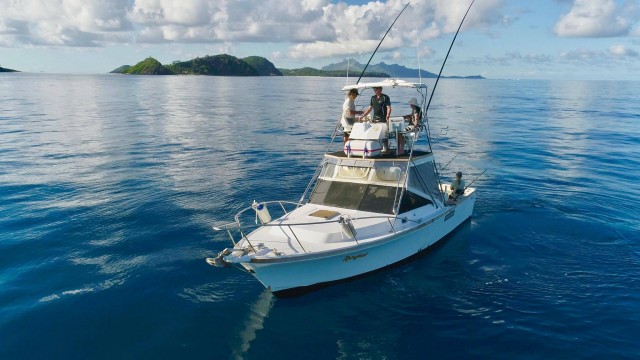