Turtles are spectacular creatures. They are modern day dinosaurs, with the first known fossils dating back more than 150 million years. The waters of Fiji boast five of the seven living species of sea turtles. Green, Hawksbill, Leatherback, Loggerhead, and Olive Ridley. At Mantaray Island Resort we commonly see both Green and Hawksbill turtles.

The green turtle is the most commonly encountered marine turtle in Fiji, often seen searching for food on seagrass beds or nesting on sandy beaches. The name does not describe its shell colour, but rather its green fat, which is prized in many pacific nations for its taste.

Over harvesting of turtles has become an issue. Female turtles do not start to reproduce until they reach around 30 years of age, and they only nest every 2 to 3 years. Adult green turtles feed during the day in shallow waters. They eat sea grasses, plankton, and fish eggs floating in the sea; while the young turtles are carnivorous. 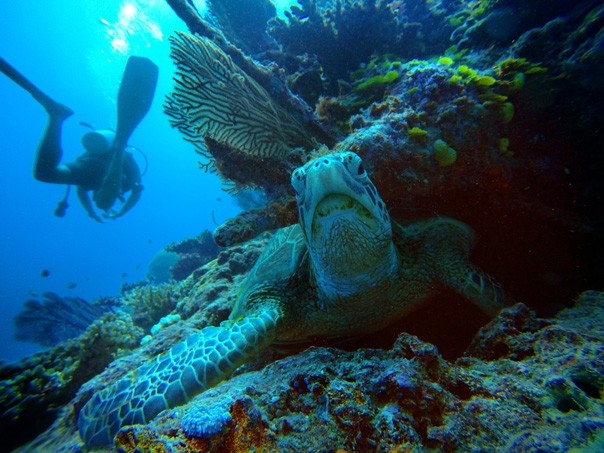 Another common turtle species in Fiji waters is Hawksbill turtles. They are primarily carnivorous, feeding on a variety of marine animals such as fish, crabs, molluscs, certain species of sponges, and jellyfish.

Hawksbill Turtles use their parrot-like beak to snatch little animals from the reef. They usually feed in the early morning or late afternoon. At other times of the day you can often find them resting on the reef or at the surface.

Hawksbill turtles can live more than a hundred years, and reach maturity at a minimum age of 30 years in the Indo-Pacific. Just like their green cousins they only reproduce once every 2-3 years.

It is estimated that only 1 in every 1,000 hatchling turtles will make it to adulthood. Unfortunately, human impacts threaten marine turtles at all life stages and recently humans have been responsible for a massive decline in turtle numbers. More than forty percent of all turtle species are at risk of extinction.

On land, eggs are harvested, nest sites are degraded, and adults and juveniles are hunted. At sea, foraging grounds are damaged, adults and juveniles drown when they become entangled in marine fishing gear, and they frequently choke on plastics—plastic bags resemble their jellyfish prey.

Mantaray Island Resort is dedicated to protecting this beautiful species and we firmly believe in the adage – “Take only photos. Leave only bubbles.”

We provide an amazing Turtle Dive where you can witness these wonderful creatures in their natural habitat. Check out the video of it below!