The animal kingdom is home to fascinating and mysterious creatures that can amaze both young and old.  At Mantaray Island we are lucky to have the majestic manta rays visit us in the tropical waters around the island generally between May and October. During this time you can even swim with the manta rays.

So, naturally ‘are manta rays dangerous?’ is a question that we get asked a lot and understandably so. 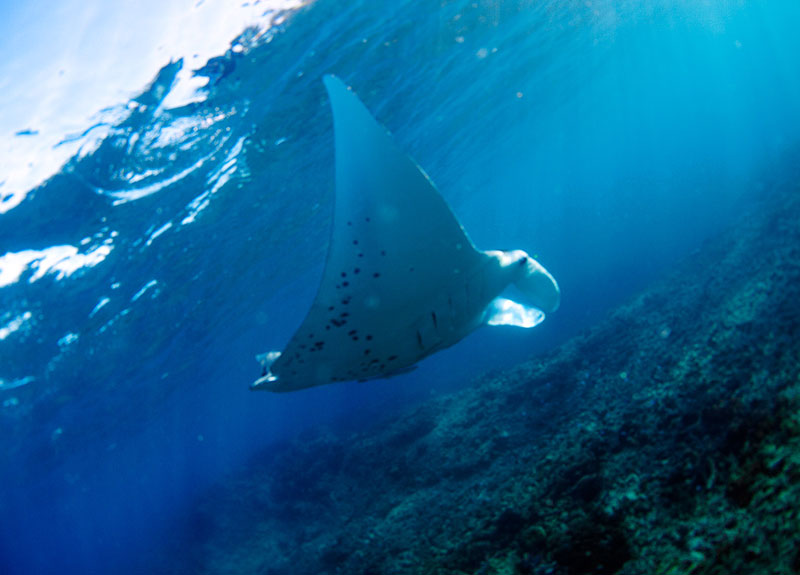 In short NO, they are not dangerous however being in the water with a 4 to 6 metre wide creature can be quite intimidating.  Armed with a little knowledge, hopefully, we can shed some light on what it is like to glide through the water with these incredibly majestic creatures!

Are a manta ray and a stingy ray the same?

They are relatives but not the same. Very often, manta rays are confused with any of their relatives, but you need to know that there are only two species of manta ray grouped in the genus Manta:

Manta Ray just like their sting ray cousins have a long whip like tail, but there’s nothing to worry about. They DON’T HAVE a poisonous tail stinger that many of their relatives have. Manta rays CANNOT hurt you.

The Manta Ray is Harmless to Humans

Although manta rays belong to the same group as sharks with their cartilaginous skeletons, they’ve shown to be more tolerant to human presence and they don’t have large teeth.

Manta rays are filter feeders eating tiny marine organisms including zooplankton, small fish and crustaceans. They do have teeth but only in the lower jaw which they use to chew their food. These teeth are not sharp enough to tear flesh and often rely on their large physical size to avoid predators like the orca, but if these are insistent they are able to swim quickly to flee. A manta ray generally moves at a speed of 14kph but can reach bursts of up to 35kph.

Swimmers say that these gentle giants can swim around them in a slow and graceful manner, and wonder who’s observing who.

Manta rays are quiet and peaceful beings that pose no danger to humans and have shown a curious behaviour at the approach of humans.

Manta rays have horn-shaped cephalic fins, which some think give them an evil appearance and can be referred to as devilfish.  We only see them as sea angels, gliding through the waters.  Many professional divers and ordinary people have been dazzled by the beauty of their swim, recognised by their wide triangular pectoral fins moving up and down so elegantly. It is not hard to see why some call manta rays “sea angels”. 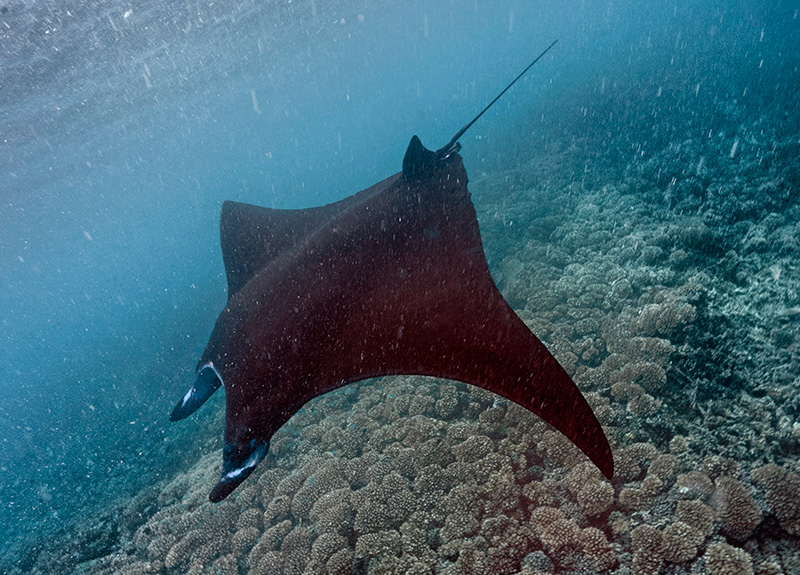 Mantaray Island has the best snorkelling in Fiji literally 10 metres from the shore line. Enter the reef directly in front of the resort to see flourishing coral and countless species of fish. The waters in front of Mantaray Island Resort been declared a marine reserve by the Matagali (local land holding clan) since 2003 and a formally gazetted marine reserve since late 2012. This means there’s been no fishing in the Mantaray Island reserve for more 14 years now.

As you can imagine, a tropical marine environment that has been nurtured for a long period of time really begins to flourish. The waters in front of the resort are widely regarded as some of the best snorkelling in Fiji, if not the world.

The Best Time to Swim with the Manta Rays

Because of this, we have one of the healthiest marine environments in the world and each year between May and October the waters around the resort are blessed with the elegance of our name sake, the Pacific Manta Ray. The waters around Mantaray Island Resort are an internationally recognised refuge for manta ray and we’ve seen as many as 20 manta rays in the channel at the same time.

There’s nothing in the world quite like swimming with a magnificent manta ray in it’s natural environment. They may be big but these harmless creatures are amazing to watch. There are truly only a few places in the world swimming with manta rays is even possible. Mantaray Island Resort is one of those rare places, so come and join us on our swimming with manta rays trip. Trips operate each day manta rays sighted with the main season being May – October. You can be lucky and see them out of season, with the manta rays arriving sometimes in March or April and one year they decided Christmas Day was a great day to visit.